A lot can happen in a year

One of the most moving (sobering, disturbing, hopeful) moments of the High Holy Day Services is the chanting of the Unetanah Tokef. This stunning video comes courtesy of my friend and co-parishioner Dave Pinto. A lot can happen in a year, indeed. Let us all hope and pray that next year is better than the last one. May you be inscribed in the Book of Life! Shana tova u metukah!
Posted by B. Glen Rotchin at 5:42 AM No comments:

A note from my favourite editor (and a fine writer of poetry and fiction and all around swell guy) Andrew Steinmetz, about, what else, editing.
Posted by B. Glen Rotchin at 7:20 AM No comments:

More reason to run faster to buy (or Amazon.ca order) the Bruce Jay Friedman book "Three Balconies" published by Biblioasis. It's a collection of new stories not older material. According to Dan, Grove Press published his collected stories a few years back. That's worth chasing down too.
Posted by B. Glen Rotchin at 5:35 AM No comments:

'The Lay of the Land' by Richard Ford 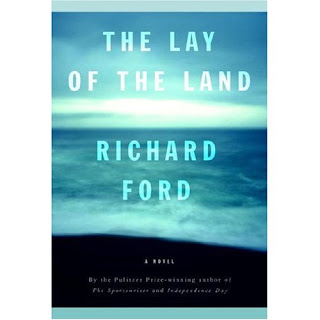 Because it is my birthday and because I wrote a poem for her, my daughter Sivan has returned the favour. And here it is.

they say when you turn 40
it's a turning point in life
knowing life's half over
should cut you like a knife,
but really, what's the difference
between 30 and 44?
do you feel quite older
do your wrinkles show lot more?
no, i think it's all the same
no matter what your age is
i think in life what happens is
you enter different stages
so really it's a number
and now it's forty four
and now you're getting older
you should enjoy your life some more
i don't care how old you are
i say your age means NIL
no matter what your number is
you're my loving father still.
Posted by B. Glen Rotchin at 6:37 PM No comments:

I pinched this off the memorial Facebook page. From his 2005 commencement speech at Kenyon. Mezmerizing.

"As I'm sure you guys know by now, it is extremely difficult to stay alert and attentive, instead of getting hypnotized by the constant monologue inside your own head (may be happening right now). Twenty years after my own graduation, I have come gradually to understand that the liberal arts cliché about teaching you how to think is actually shorthand for a much deeper, more serious idea: learning how to think really means learning how to exercise some control over how and what you think. It means being conscious and aware enough to choose what you pay attention to and to choose how you construct meaning from experience. Because if you cannot exercise this kind of choice in adult life, you will be totally hosed. Think of the old cliché about the mind being an excellent servant but a terrible master.This, like many clichés, so lame and unexciting on the surface, actually expresses a great and terrible truth. It is not the least bit coincidental that adults who commit suicide with firearms almost always shoot themselves in: the head. They shoot the terrible master. And the truth is that most of these suicides are actually dead long before they pull the trigger."
Posted by B. Glen Rotchin at 1:02 PM No comments: 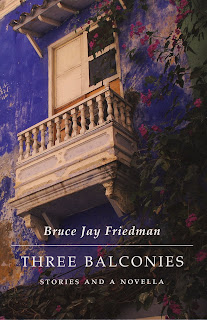 Call it coincidence, serendipity, zeitgeist, whatever, Dan from Biblioasis comments in response to my earlier post on Bruce Jay Friedman they will be publishing shortly his collected short stories under the title Three Balconies. Don't walk, run out to buy it!
Posted by B. Glen Rotchin at 11:34 AM 1 comment:

Let the apotheosis begin. Great interview. Pick through it like a vulture for hints of future suicidal despair.
Posted by B. Glen Rotchin at 6:00 AM No comments: