A new (ish) story from The Rent Collector 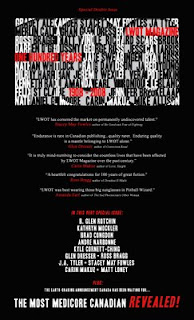 I am thrilled to announce that a new(ish) story of mine called Salesmanship set on Chabanel (of course) is published in the 100th anniversary edition of LWOT magazine. It's quite a privilege to have been selected for this milestone issue of the finest literary magazine on the net. And while you're there check out the other stories! Especially the winner (if you can call it that)of the Most Mediocre Canadian contest.
Posted by B. Glen Rotchin at 10:14 AM No comments:

A farting dog meets the Jonas Brothers in Hollywood 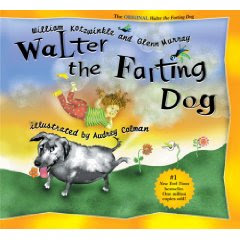 When they said that Canada was the United States' largest supplier of gas they might have been speaking about a farting dog.

This is what happens when two titans in the pantheon of US culture come together, like nitro and glycerin. The result is a gastric explosion of marketing genius. The secret... don't tell... is that one of them is Canadian and it's not the Jonas Brothers. In my humble opinion we should give Walter the Farting dog a star on Canada's maple leaf Walk of Fame between our two greatest cultural exports to the States, Celine Dion and Jim Carrey. What further proof do they need south of the 49th of our inherent cultural superiority? Actually, I take special pleasure in this story for two reasons: A. The authors and illustrator are Canucks and, B. The illustrator is my first cousin Montreal-native Audrey Colman. All involved deserve to make additional fortunes ('additional' because they're already reaping bank vaults on the book series, and farting dog plush toys etc.) from American consumers. I'm telling you, culturally-speaking we own them... our evil genius is letting them think they own us.
Posted by B. Glen Rotchin at 5:27 AM No comments:

Timewaster of the week!

Now you too can be Jackson Pollock! (hint: right-click to change colour)
Posted by B. Glen Rotchin at 2:15 PM No comments:

As editor of Esplanade Books (the Véhicule Press fiction imprint) Andrew Steinmetz has proven time and again - with his books scooping up awards and nominations left, right and centre over the past few years - that he's one of the best in the business. He is himself a multiple award nominee for poetry and non-fiction. Now, apparently fifteen years in the making, Andrew's debut novel has arrived from Gaspereau Press. My guess, if Andrew's record is anything to go by, is that the book is definitely worth your attention. Here's what the publisher has to say about it:
In an unusual fiction about memoir, Andrew Steinmetz tells the story of his great-aunt Eva who performed in the first workshop production of Bertolt Brecht’s masterpiece The Threepenny Opera, in 1928. Steinmetz takes the story back to Eva’s childhood in Germany, with her invalid mother and domineering siblings. Her training as an actress began just after her graduation from high school, and her introduction to the philosophies of Brecht and his contemporaries soon followed. With the pronouncement of the family’s Jewish origins, both Eva and her brother left Germany to escape Nazi rule, Eva eventually settling in Canada. In their sessions with the tape recorder running, we see Steinmetz’s own life as it intersects with Eva’s, and his changing perspective on her life and work. Tied together with threads of Brecht’s play, Steinmetz presents a life lived as though the world were a stage. A fictional tribute, Eva’s Threepenny Theatre is as much concerned with what happened as what might have or was imagined to have been.
“I’d known Eva since childhood,” says Steinmetz, “and always in the back of my mind was this story I’d heard about her and The Threepenny Opera. I didn’t know much about Bertolt Brecht, initially, but in my early twenties I was a songwriter and one night while I was in the studio recording, I got to talking with the engineer and later he pulled out a record of Lotte Lenya singing ‘Seeräuberjenny’ and ‘Kanonen-Song.’ That was it. Lenya’s kitsch and the killer instinct: Eva talked like that. The droll, aloof, harsh cabaret style is incredibly moving, to me at least, something which seems to work almost despite itself. It was easy to see Eva as a product of Weimar Germany, of that precise period evoked by these songs. So I guess the initial and strongest connection between the novel and Brecht was through the lyrics he wrote for this music. As a socialist playwright, Brecht wouldn’t touch naturalism, seeing it as an endorsement of a bourgeois or genteel world view, and I have to say, as a writer, I could never approach writing a family memoir wearing a straight face. Eva was schooled in Brecht, and so it felt right that the novel’s form would reflect that, and at the same time bring about some genre consciousness. I also wanted some sort of emotional arc despite putting up with ideas of alienation and detachment. If this makes it sound like I’ve been working at cross purposes for the past fifteen years, which is as long as I’ve been at it, then that’s exactly right.
Posted by B. Glen Rotchin at 1:12 PM No comments:

Here's a reprinted review of Robyn Sarah's 'Little Eurekas'. Robyn is a fine poet, educator, short story writer and essayist who's been fighting the good fight for years. She writes about poetry with greater clarity, honesty and passion than anyone in Canada. Her essential message about why poetry matters is not stuffy or highminded. On the contrary, it's because poetry can offer a beauty and enrichment that will all need. This collection is indispensible.
Posted by B. Glen Rotchin at 5:45 AM No comments:

Closer To Home by Terence Byrnes 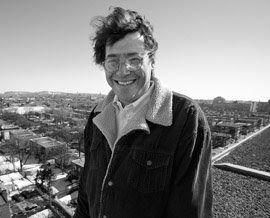 I draw your attention to this online interview with Terence Byrnes talking about the art of literary photography and his new book of writers portraits. I had the pleasure of spending a few hours with Terry when he came to take my photo for the back cover of The Rent Collector (above). He's been photographing authors for a number of years and has compiled quite the gallery of portraits, mostly of Montreal writers, some of which can be viewed at the Véhicule Press website. More than just satisfying the task of shooting an author portrait for a book, Terry and I toured 99 Chabanel together - every nook and cranny - going from abandoned garment factory spaces down to the basement furnace room and up to the rooftop. Surprisingly, the portrait of me selected to appear in the new book is not the one used for the novel (above). But it is, rather, an exact and very revealing portrait (although admittedly somewhat unflattering,) taken in front of a wall of ominous-looking pumps and pipes in the basement of 99. Terry's eye is impeccable and he has the technique to match. This book is a treasure.
Posted by B. Glen Rotchin at 6:05 AM No comments:

As we stood in synagogue this past week, begging forgiveness from the Almighty for our transgressions, seeking a cleansed conscience and soul, the financial markets were undergoing a global cleansing of their own. I couldn't help thinking about what was happening in apocalyptic terms as I turned on the boobtube Thursday night (after a 26 hour media fast) to catch the latest reports of unabating stock market declines. It's not, as Warren Buffet called it, a "Pearl Harbour." Because that suggests a surprise attack and momentary defeat. At least it ought not be seen as a market Pearl Harbour. I prefer to think of it as a financial Yom Kippur. A day of reckoning. A time to take stock (pun intended) of the corporate greed, systemic mismanagement, and questionable approaches and practices that have underpinned the US-driven global financial system for over two decades. On Kol Nidre evening I spoke about 'Forgiveness in Unforgivable Times'. Beginning with the Holocaust, I said, terms such as 'forgiveness' and 'harm' and 'responsibility' have had to be completely redefined. The scope of attrocity and wrongdoing perpetrated in our time is without precedent. We are becoming increasingly interconnected and interdependent and the pace of change is so fast that our misdeeds now outstrip our capacity to adequately consider and comprehend the consequences of our actions. The injustices are piling up, the harm is more and more vast, and our willingness and ability to respond is evermore diminished. The question now is, whether the global financial Yom Kippur of this week will represent a genuine cleansing, a true reckoning, an opportunity to shift the paradigm to something that makes sense in the long-run and benefits the majority, and not just the Wall Street elite and their political backers? Or will we return, in short order to the same old same old? A probable answer lurks in my bones, and I shudder to think of it.
Posted by B. Glen Rotchin at 6:33 PM No comments:

Of all the Jewish prayers, Kol Nidre is one of the most recognizable—and certainly the most controversial. Neil Diamond intoned it in order to penetrate the stone heart of his cantor father at the end of the remake of The Jazz Singer, and Al Jolson sang it, mercifully out of blackface, in the 1927 original. Max Bruch used the haunting music that accompanies the prayer to furnish the full title, and half the theme, of his celebrated adagio in 1881. Beethoven, too, borrowed the theme for the sixth movement of his String Quartet Op. 131, which had been commissioned by the heads of Viennese Jewry seeking to honor the founding of a new synagogue. Even Perry Como and Johnny Mathis recorded their own renditions in the late '50s. from Slate

Tonight more Jewish people will attend synagogue than at any other time of the year. They will flock to hear the achingly beautiful melody of Kol Nidre to begin Yom Kippur, the most hallowed, sombre day of the Jewish calendar. I'll be there, and as I have for the past fast years, I'll be delivering the d'var Torah (literally "words of Torah" ie. sermon). I'll be speaking about what forgiveness means in unforgivable times. To all my Jewish friends, g'mar chatimah tova, have a meaningful fast, may you be inscribed in The Book of Life on Yom Kippur and may the day bring you new beginnings!
Posted by B. Glen Rotchin at 5:23 AM No comments: