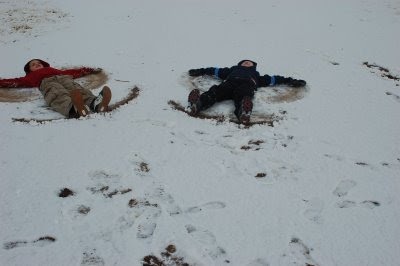 The snow fell and fell and I only thought
Of the dreaded shoveling to be done,
Counted the seconds as flakes piled-up, fought
With myself, asked how long should I wait? One
Two, three, four hours, or more before we’d got
Too much for my unsteady heart - a ton.

While I fretted, from up and down the street
Hooded faces exploded through doorways,
Like rebels from dark forest hideaways;
Kids with their mouths double-bound in scarves, feet
Booted; they lined up along my walkway
Straight as a firing squad, counted to three,

And all at once fell backward, dropped flat, played
Dead: Arms and legs flapped like convulsing geese
Blown clean from the sky (but not quite deceased);
Then they lifted themselves like spirits, gazed
Down at the shadow imprints they had made
Where their departed bodies had once laid.
Posted by B. Glen Rotchin at 10:44 AM No comments: 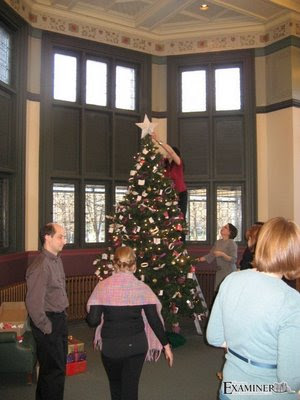 The Rent Collector? Apparently. At the Westmount library anyhow. The staff came up with the inspired idea to spruce up the old tree creatively by inviting library patrons to help decorate it with miniatures of their favourite books. As mentioned in this article from The Westmount Examiner my novel is now hanging from an evergreen bough between loops of tinsel. It's deliciously strange to think that a story about a deeply religious orthodox Jew is hanging as a Christmas ornament. But it wouldn't be the first time that the book was chosen as a Christmas holiday favourite (more specifically "Best book to give your Jewish in-law trying to navigate Christmas dinner with the goyim.") Oh holy night!
Posted by B. Glen Rotchin at 6:10 PM No comments: