The Uninvited Guest by John Degen 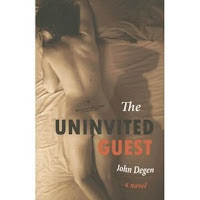 The writing is crisp and controlled. This is an enjoyable, if not completely successful, first novel by a writer most definitely worth watching.

Hapless, aptly-named Stanley Cooper has been laid to rest and has passed the torch as guardian of Lord Stanley's Cup to Tony Chiello. Tony's first task as keeper of Canada's illustrious symbol of hockey supremacy, is to escort it to Romania. The prized hardware is to be the special guest at Dragos Petrescu's wedding in his hometown. It's an intriguing premise, and the reader can't help wondering who came up with this strange tradition of allowing each player of the winning team to spend some personal time with hockey's Holy Grail? The possibilities for plot curves and detours seem endlesss. Instead, Degen chooses to play it straight, no fancy deking or headfakes, just the literary equivalent of a slapshot between the legs.

The story has two main parts. The first is about "Two-Second" Stanley Cooper, so-named when he costs the Toronto Maple Leafs a game in the 1951 championship because of a timekeeping flub. This section is really a set-up for the second part about Tony's sojourn to Romania in the company of Drago's family, particularly his father Nicholae and cousin Diana, whom Tony fancies.

Tony plays second fiddle to the Cup, or as Tony himself puts it, the Cup takes him along on its travels not the other way around. Tony's a former hockey player who didn't quite make it to the pros. He's on the defensive, along for the ride in love and life, and we know that part of Degen's play is ultimately to bring Tony out of the shadows and into his own. Still, I had a problem caring about Tony, and I think it's because we simply don't get to know him intimately enough. When we learn about Tony's brief and intense relationship with hotblooded, insatiable Ewa Loest, it feels plunked down in the middle of the text.

The same goes with other episodes meant to add texture, like that of Valentin Propescu, the pervert music teacher from hell who's not shy about throwing his substantial girth around to get what he wants in return for his clients' social advancement. And again in the end, when the recently immigrated Petrescus recall being visited by a former member of the secret police in Montreal (another uninvited guest) who makes unexpected amends to Nicholae in a very satisfying way. It feels without precedent, a structural hitch which might have been remedied by introducing Ionescu earlier in the story. Transitions could have been handled more smoothly with a little more editing.

Still, when the narrative lands on Romanian tarmac Degen shows what he's capable of as a writer. The prose shifts from an anecdotal tone to one possessing a more layered and rewarding literary quality. Degen appears to have an insider's sense of what it felt like to live under totalitarian rule in Ceaucescu's Romania, and conveys well, the daily travails of life in a police state, coping with paranoia and secrecy. He uses backgammon as a powerful motif expressing the Romanian pride, humour, courage and determination of citizens living within a political system in which gamesmanship was the currency of existence, and everyone had to be a player of one sort or another to survive.

When I closed the novel, the lasting questions were not about Tony and where he would go from here, but about the real Stanley Cup. I wondered about the trophy's venerable history. Is it true what I'd heard that one time a hockey player (from the Montreal Canadiens?) had taken the Cup home and on the way suffered a flat tire? After changing it, the story goes, he forgot the trophy on the side of the highway. There must be dozens more bizarre tales of the Cup's travels. I'm grateful to Degen for opening that door and look forward to his next outing.
Posted by B. Glen Rotchin at 9:28 PM